Biological Weapons Convention and other stories
Next

Climate action and other stories

Host: Hello, my name is Claire Heffron, and welcome to the Geneva Centre for Security Policy podcast on the latest issues, advancing peace, security and international cooperation.

Dr Filippa Lenztos: Well, the biological weapons convention is an international treaty that completely prohibits the use of biological weapons. And it's been enforced for a number of years since you know, 1976 now, and so really a long time. And there should be no countries in the world that develop biological weapons or that would use biological weapons. And that's really what that Treaty is there to ensure that we maintain this norm against biological weapons because the world considers this form of weaponry so abhorrent, that it’s completely banned and unlike the other, you know, Weapons of Mass Destruction, the nuclear side, we banned some things but not all things. Some are allowed to have nuclear weapons but not everybody. On the chemical side again, there are bans on chemical weapons but for certain things like national domestic riot control, for instance, you are allowed to use chemical weapons. They wouldn't be termed chemical weapons they would be termed things like tear gas. But essentially, they are the same sorts of things. So these other conventions have all these other exceptions to them. But the Biological Weapons Convention is special in the sense that it completely prohibits these sorts of weapons.

Dr Filippa Lenztos: No, I think you've hit the nail on the head exactly right there. So today, we've just had Tanzania join as well. So we're now at 183 States Parties to the Convention, which is pretty much global. We're missing about 10 countries or something like that, but we're pretty much global. How do we ensure everybody sticks to the convention? This is really the sticking point because with biology, unlike with chemicals and nuclear weapons, the biological side is, is so dual, it's so dual-use, it's so ubiquitous everywhere. You have what you need to create a weapon almost in, you know, a beer brewery, for instance, or in a pharmaceutical company that produces vaccines. Well, it could also be changed around to produce weapons. And so because so much of this, both the science and the equipment and the facilities that you need to weaponise disease essentially, is sort of readily available, it becomes very hard to check. Over the years, that's changed quite substantially. So we in the beginning, I mean, this fundamentally, this is a Treaty by States for States. And it was negotiated, you know, in the depths of the Cold War. This is a long time ago when the idea of public engagement looked very different to what it does today. And so part of the process over the years has really been to make sure the Treaty, you know, continues to be a living document and is relatable and relevant to its stakeholders. And because biology is so ubiquitous, the stakeholders are broad, you know, when you look at the other, all of us, right, and if you look at the other treaties, it's very much focused if the nuclear for instance, it's very specialised within the military. Here, we're actually talking about university labs. We're talking about undergraduate students. We're talking this is relevant to everybody. And so the main stakeholders of the Treaty are essentially the public's, the various public's that we have and they were not involved to start off with. So there's a big role today to get that sort of engagement from all these various stakeholders in the Biological Weapons Convention and certainly individual scientists, but also these national science academies and international bodies, within the sciences play an important role in providing you know, expert guidance in explaining where the science is at at the moment, what's possible, what could become possible? All those things also, you know, hospital labs and industry and biotech startups and synthetic biology and companies and all of the gene editing companies, all these sorts of stakeholders playing an important role. And so we've seen a general opening up of the Convention and the meetings to bring in civil society. We're not where we want to be yet

Host: There are more people on the move than ever before. Every minute at least 30 people around the world are newly displaced, half of the world's refugees are children and thousands take flight without the protection of parents or other family members. During Geneva Peace Week. Xavier Colin a GCSP Associate Fellow discuss the world's growing refugee crisis with Dr Muna Ismail Programme Manager of Refugees as Rebuilders at Initiatives of Change UK and founder of the Yeheb project.

Dr Muna Ismail: It was 2011 and in the region of Horn of Africa where Somalia is situated, there was a drought, which killed more than 200,000 people. 5% of that being children and I remember myself sitting at the Royal Botanic Garden. I'm thinking what my life is for, what's the purpose of my life and being angry, that people are dying in country of origin, my country of origin, because of lack of food. So that whole aspect of migration what I had to go through the trauma, the displacement, all surfaced and so I made a conscious decision to get out of labs because my work was more working in labs and get out of labs and apply my transferable skills, my knowledge to something which could build a worthwhile life or some kind of meaningful actions for people who are suffering in my country of origin because I, you know, people when they are displaced, it's you either have this feeling that you don't want to have anything to do with country of origin. Some people have longing for country of origin. I never felt longing for country of origin and doing something up until that time.

Mr Xavier Colin: Not very many people act like the way you are some people just forget about the country they could they come from. So you're really now involved, you know firsthand what is happening in Somalia. Give us some examples of what you're doing with the refugees because one thing is to talk about the refugees. The other thing is, what do you do? How do you help them and with which purpose?

Dr Muna Ismail: In 2014, I joined Initiatives of Change by chance, I was led, this is how I believe, I was led to this organisation which I never thought was existing in London. When I joined Initiatives of Change, my first assignment was to train women of ethnic minorities. And then following on that, I was given the assignment to come up with a training programme for diaspora leaders, mainly from the Horn of Africa. And that, having that chance, I moved on to do more practical training and in 2016, we came up with the seeing people crossing the Mediterranean seas, crossing the border from Turkey into Europe, many of them from Syria at the time, which was really experiencing the onset of the Syrian civil war.

Mr Xavier Colin: But not only from Syria but also from the Horn of Africa.

Dr Muna Ismail: But that influx in 2015, mid-2015 to late 2015, were mainly from the Turkish route, and they were mainly Syrians and Afghans, Iranian. But then there was also an unease in the European countries and soil that they were entering. So we came up with the idea, we kind of coined up the phrase “Refugees as Rebuilders.” Because the refugees if you see them as people who are just coming in to take every opportunities from the community that they are coming to live with, that's a negative connotation that you are going to tag onto these people.

Mr Xavier Colin: What is the positive connotation?

Dr Muna Ismail: Yes, yeah, the positive connotation is the name Refugees as Rebuilders. And we have seen within the Initiatives of Change tens of thousands of people wanting through the training that Initiatives of Change provided, and through the stories of these people, and in Somalia, which was a place that they originate and these people are returning and filling in every sector and rebuilding their countries of origin. So the rebuilding aspect was an example that we drew from the experience of Somalis who came to settle in Europe and mainly also in Britain, and who at that time, many of them returning to countries of origin. So if these refugees coming to Europe were given the support and care and place to live, they will be, what we thought one day and it's most of them will be the ones who will rebuild their countries of origin, that is the idea.

Mr Xavier Colin: Okay, but the fact is how many people are involved in that programme? Are they really willing to do this? And what are the means, who is going to help them financially to do that? And on top of that, to rebuild what in the country, what is the field of action?

Dr Muna Ismail: Okay the Refugees of Rebuilders is a training programme. So what we do is we train diaspora, settled refugees. We have a faculty of trainers within IofC, Initiatives of Change UK, the faculty consists of trainers, trainers who train the participants who are taking part in this course. So, we have different levels of the course and once a participant finishes the third level of the course, they go on to mentoring and after the mentoring, they will be equipped with practical tools to use should they want to return to their countries of origin. The course is based on what we call a three legged stool, which is...

Mr Xavier Colin: Give us just some examples of those particular tools so we understand what rebuilding exactly means.

Dr Muna Ismail: Okay, so once a participant is enrolled into the course, they start the foundation level of the course and with that foundation, they're introduced to practical tools in ethical leadership for just governance, in dialogue for social cohesion, for trust building, and in sustainable livelihood for creating innovative economic and lifelong options for countries who are conflict affected, which are conflict affected and fragile. So, once they once they get these tools from the foundations they develop further at the intermediate level and they apply these skills at the advanced level and by the time they finished the advanced level in the course they have further six months of mentoring and at which point they will most likely be ready to follow their calling and to do some local community based or work within in their countries of origin and if they can’t return to their countries of origin, then within their community in the diaspora setting.

Host: That's all for today's podcast for the GCSP. Thanks for listening and thank you to Dr Filippa Lentzos for joining us along with Dr Muna Ismail. Join us again next week to hear all the latest insights on international peace and security. Make sure you subscribe to the podcast on iTunes. Until then, bye for now. 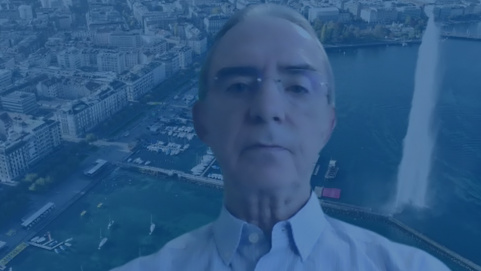