Skip to main content
Navigation
My GCSP
Regional Challenges, Podcast and other stories
Back to Digital Hub

Duration: 14 minutes 16
Turkey’s foreign policy and other stories
Next

Host: Hello, my name is Claire Heffron, and welcome to this episode of the Geneva Centre for Security Policy podcast on the latest issues, advancing peace, security and international cooperation. Today's Turkey is a geopolitical hotbed with its unique location, it’s exposed to numerous challenges. Some of them pose risks to its security and its foreign policy. We discussed its current issues with Asli Aydintasbas, who is Senior Policy Fellow at the European Council on Foreign Relations. And in today's world where people get their news from Twitter, Facebook and Google, social media now plays an integral part of international affairs. We discussed the importance of emerging technology with Dante Manuel Lincona Estovas,  Senior Communications Officer, Social Media at the International Federation of Red Cross and Red Crescent Societies (IFRC).

Host: Turkey's relationship with its neighbours and global nations have now forced it to become assertive as a regional power. Earlier we spoke to Asli Aydintasbas, Senior Policy Fellow at the European Council on Foreign Relations.

Host: Firstly, what are the key objectives of Turkey's foreign and security policy?

Ms Asli Aydintasbas: The Turkey that you see now is very different from the Turkey I grew up in. In many ways, I grew up in a Turkey that had turned its face towards the west, wanted to be part of the European Union and had very little interest in the Middle East. Today's Turkey after 18 years of the Justice and Development Party, led by Tayyip Erdoğan is a country that definitely wants to have a voice, an influence and even military presence outside its actual borders. It is no longer single mindedly interested in being part of the West. I think it wants flexible alliances with the West, you know, the EU, Russia, and the United States not necessarily, finding its NATO partnership to shape its entire foreign policy. And I think, thirdly, it's a country that is more self assertive and engaged with the Middle East. Whereas, for my generation of Turks, for my mother's generation, and even for my grandmother's generation, the Middle East was a no go area. There was no interest, no desire to get involved and mesh, let alone have any presence. I think that the three generations after the collapse of the Ottoman Empire, the lesson they took was we need to be a European nation state and only a nation state. I think there is a new generation and definitely a different mindset now in Ankara, with greater and greater involvement. In the Middle East, a tendency to see Turkey as a country that has to be present in Syria, present in Libya. And I think with the presence of a rising number of Syrian refugees and more engagement in the Syrian conflict, the Turkish foreign policies now is as much about the Middle East as it is about Europe.

Host: What are the key challenges, opportunities facing Turkey’s foreign and security Policy?

Ms Asli Aydintasbas:  I think this external engagement and desire for external engagements beyond Turkey’s and nation state borders comes with opportunities and challenges or opportunities. Obviously, you know, Turkey, it has growing trade ties and Africa, with the Balkans. It's not just exporting goods, but as investments in these places and also is developing its sphere of influence and in its immediate geography would be the Middle East or the Balkans. The challenges are the security challenges, with each engagement come risks that are sort of actual human casualty figures as we've had in the Syrian conflict, to things like refugee inflows to fault lines. Turkey certainly has new friends in the region and new alliances, but it also has new enemies. You know, there are new fault lines that are formed in the Middle East, Qatar and Turkey on one side and Saudi Arabia and UAE on the other side seems to be one of the fault lines in the eastern Mediterranean today. So it's a mixed bag, advantages and opportunities alongside challenges.

Host: What is next for Turkey’s evolving foreign and security policy landscape. Is it following any trends?

Ms Asli Aydintasbas: The Syrian issue is perhaps the most burning foreign policy issue for Turkey, it's now involved in the Civil War as a side to it. It's supporting both in terms of supporting opposition and running several different pockets inside Syria, which are now under Turkish control and of course, now involved in a very hot conflict directly with the Syrian regime. But of course, Syria is going to be the top issue in foreign policy. Engagement is popular in some parts and not so popular in other parts. Foreign policy is always a domestic issue. And I think more and more focus on the Turkey-Syria policy is going to make it difficult for the government to deepen its engagement elsewhere in the region. And I think that we're going to be discussing Syria a lot over the next two, three years. And certainly, it's going to be a top issue in Turkish domestic politics and competition as well.

Host: What is unknown about Turkey’s foreign and security policy that should be known?

Ms Asli Aydintasbas: When I read opinions of Turkish foreign policy, there is often the sense that everything is very carefully thought through, premeditated and part of a grand strategy. And to be honest with you, even with big powers, but certainly for medium sized powers like Turkey, sometimes things happen on a far more ad hoc basis, not really institutional decisions, not things that were decided years ago. But you know, as a response, an ad hoc response to a developing crisis, for example, the Idlib conflict. The final phase of the Syrian conflict is one in which Turkey is… it doesn't fit Turkey's Syria policy in other parts of Syria, but it's a response that's developed as events on the ground evolve. So foreign policy, yes, it's often based on principles but not always number one, and sometimes it's just responding to hot burning issues of the day.

The Middle East and North Africa region is suffering from conflict and destabilising accumulation and flow of arms. As leaders, the pressure is on to act and work towards conflict resolution and preventing destabilising arms build up, protecting both national security and human security, there are global responses but also regional solutions to such challenges. I'm Marc Finaud, the director of the arms control course for the Middle East and North Africa region. At the Geneva Centre for Security Policy, we educate practitioners to fulfil their tasks effectively. We use expert presentations, case studies and interactive exercises as methods to help people better respond to security challenges with international norms. We can help you achieve your goal by making you understand the potential offered by international norms and regional solutions to the security challenges of your region, the Middle East and North Africa. We have a plan to have your authorities abide by their international commitments and contribute to national, regional and global security. Also to help you elevate your own positioning by recommending and applying the right policy decisions. Join us in this common endeavor for regional and global peace and security. See you in Geneva and in Amman!

Host: In today's society, the use of social media has become a valuable communication tool worldwide, as well as to share vital information. Earlier we spoke to Dante Manuel Lincona Estovas, from the International Federation of Red Cross and Red Crescent Societies. He shared with us the latest on social media and international affairs.

Mr Dante Manuel Lincona Estovas: 10 years ago, nobody was really taking social media seriously in the international affairs arena. So many pioneers had to open the discussion on this specific topic. I think nowadays, there is more or less consensus. In fact, 97% of the UN member states already have a presence on social media. So that tells you how much the adoption of social platforms has been widely adopted by most governments in the world. I think social media has become a very important part of our lives every single day that we are opening our eyes to our phones. We get notifications from our friends, from our families, from content that some of them saw on social media platforms. So, in fact, depending on how old you are, the many social media platform accounts you are likely to have, the younger population may have up to nine social media accounts and the bracket that we have data from between 45-55 might have up to five social media accounts. So we are seeing a big adoption in terms of the global population that have access to internet having social media accounts for different reasons, for keeping in touch with their loved ones, for learning something that is happening in the news, or particularly for those who live abroad to keep a close touch with their culture, their connections, their network, wherever they come from and social media has played a very important role in my professional life. From my work here, in Geneva, whether I was working for the Mexican government, or the World Health Organization, or now for the International Federation of the Red Cross, it has really shaped not only my professional life, but also my personal life.

Host: What do you think are its challenges today?

Mr Dante Manuel Lincona Estovas: As with most technology platforms, they have a very positive aspect. And it's always full of challenges. We already discussed some of the positive aspects of social media and those that are most challenging today are issues that have to deal with privacy and data and misuse of data from some of the platform providers. So I think one of the big challenges that we are seeing across the board, from all the technology companies is they have to deal with misinformation. And there have been some remarkable efforts but not nearly enough. With the level of influence comes a level of responsibility. And I know that tech companies understand that. And we are seeing positive steps being taken today. But as I've said, not nearly enough.

Host: Where do you see the future of social media and its development?

Mr Dante Manuel Lincona Estovas: It's impossible to predict where we will be by the end of 2020. Just looking at what happened last year with the emergence of a platform such as TikTok that really came as a very important new player into the social media landscape. It's impossible for me to tell where we're going. That being said, I think most of the content that we are seeing today will need to evolve. Some platforms are lagging behind in terms of how young their new users are, and some others are understanding behaviours, such as consumption of vertical video or other kinds of design that makes user friendly experience very enjoyable. People want to be on social media having a nice experience. They don't want to see it as a burden. So those tech companies that understand that by making a nice and friendly user experience, they will get better users would get the better results.

Host: That's all we have now for today's episode. Thank you Asli Asyintasbas for joining us along with Dante Manuel Lincona Estovas. Listen to us again next week to hear all the latest insights on international peace and security. Bye for now. 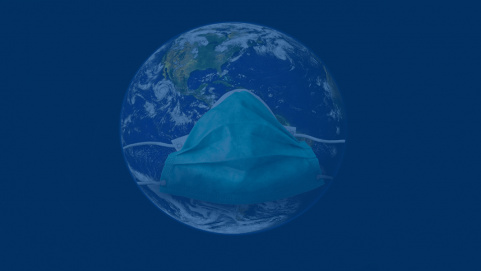