Peacemaking since the First World War and other stories
Next

Listen to the third episode

Host: Hello, my name is Claire Heffron and welcome to the Geneva Centre for Security Policy podcast on the latest issues, advancing peace, security and international cooperation. November 11 marked and 101st anniversary of the signing of the Armistice on the Western Front, ending the hostilities of the First World War. We spoke to Dr Paul Vallet, a lecturer in European, American and Russian history. And we also spoke to Ambassador Jean-Marc Boulgaris, former Deputy Secretary of State for Switzerland, who both share about Centennial lessons: Peace-making since the First World War. Both gentlemen are Associate Fellows with the Global Fellowship Initiative at the GCSP.

Host: Dr Paul Vallet, a historian with the Global Fellowship Initiative shared with us the lessons learned from the idealism of the peace-making process. Firstly, what were the circumstances and who were the principal actors of the mediation?

Dr Paul Vallet: The peace-making that takes place between 1918 and 1923 occurs under very specific circumstances and particular characteristics that really explain the outcome and the criticism that has been levelled on a historical point of view to this peace-making. The first characteristic is the fact that the hostilities were halted by an armistice, which is a military convention for a standstill that preceded the peace negotiations leading to the treaty. What we know is in fact that there was a string of armistice’s in the end of 1918, in fact, four separate ones, and the one on November 11, was the final one which halted the hostilities on the Belgian and French so called western front. There is a fact that each of these armistices was requested by the central powers from the Allies, each acting separately, and it's really being faced with the desertion of its Allies, and the prospect of a revolution breaking out at home, that convinced Germany to finally sign the Armistice on November 11.

Host: What was their responsibility in the outcome?

Dr Paul Vallet: What then came as a nasty shock was that the fact that the German military as well as the German society, and political leadership had not yet admitted the reality of their losing the war and of being under the threat of invasion by the Allied armies. So when the Allies then proceeded to ask for very harsh military terms and harsh peace terms in the negotiations that came in as a very nasty surprise.

Host: And who would the main negotiators?

Dr Paul Vallet: For the first time in diplomatic history. The main negotiators were the heads of government and heads of state.

Host: How did civil military relations and nationalism impact on the peace-making process?

Dr Paul Vallet: What we were seeing was the fact that the Armistice itself preceded the peace negotiations, and the armistice being a military convention to halt hostilities, that gave paradoxically the military, and the military factor, an added weight into the peace-making process, as well. The Allies began by asking in their armistice terms of November 1918, for a number of military guarantees that really transformed not just a situation on the front but gave them the leading military advantage and the fact that they were allowed to advance up to the Rhineland, the German Army had to pull out from all of its occupied territories in France and Belgium, that really, obviously, was something that turned what was the unacknowledged defeat of the Germans in the fall of 1918 into a military defeat, and military and political defeat as a whole. The second aspect was that then the Allied military commanders were also able to stress to the civilian leaders who were conducting the peace negotiations the fact that there was a necessary emphasis to place on military guarantees to prevent the hostilities from breaking out again in the ensuing decades. And this was, of course, only natural given the enormous human and military toll of the past four years. But the results obviously, were perhaps much harsher terms than what had been expected in the original by the civilian negotiating teams. And of course, from the German point of view that even turned the situation of the imposed peace terms even more sour. By refusing to accept this political and military defeat the German army itself played a very crucial role in creating a latent desire for revenge and the preservation of nationalism in Germany for the years to come. What also, of course, occurred for the other countries in Central and Eastern Europe, in particular, the borders that were created as a result of the peace settlements created a number of new nations, nation states as well in Europe, that too, is of course a factor to rather reinforce nationalism in Europe rather than abate it and this of course offered a poor prospect for reconciliation in the future years.

Host: What elements of idealism of the peacemakers in 1918 survives in today's international politics?

Dr Paul Vallet: This idealism somewhat survives and the fact that it was corrected after 1945 by the putting in place of the United Nations system. That was very much aimed at taking stock of some of the mistakes that had been observed in the peace-making of the period following the First World War and the unsuccessful experiment with the League of Nations between the two world wars. Now, what also of course survives is the fact that there is an approach towards conducting diplomacy and international relations in a very novel way through multilateral forums, which in many ways, even if some of them get critiqued nowadays, they have broadened the scope in which traditional international relations are conducted. And it's really remarkable up to this day to see the range of issues that go much beyond the preservation of peace and disarmament. They deal with economics, trade, finance, human welfare, health, the sea, agricultural production, telecommunications, and all of these issues have materialised themselves in the broadening of the United Nations and international agencies, a great many of them, of course, still have their seats in Geneva. That is a very physical manifestation that we have here in Geneva of the survival of this idealism.

Host: Earlier we spoke to Ambassador Jean-Marc Boulgaris, who was the former Deputy Secretary of State for Switzerland and Associate Fellow with the GCSP’s Global Fellowship Initiative. What lessons can we learn from the peace-making process that followed the armistice of 11 November 1918?

Ambassador Jean-Marc Boulgaris: This is a very tricky question, but I think it enables people when you think about this event that we were confronted with a situation where one had to choose between two paths. The first path would have been the old fashioned way of solving conflicts in antiquity vae victis or one could have followed the path which Churchill recommended in his World War Two memoirs, which is in victory magnanimity. And one was just in between. There was one aspect of these negotiations, which were really the antique way vae victis. Germany having nothing to say in the discussion, having to take the text which had been agreed between the victorious persons and the Germans called it then a dictate, that is had been dictated to them they had not participated in the negotiation.

Host: Just some of the criticism level during the 1918-1923 negotiating process reflect contemporary problems in peace-making today?

Ambassador Jean-Marc Boulgaris: In some way, yes, in the sense that there is, as before, a special role for the big guys. If you take the example of the Conference of Dayton, which ended the war in Bosnia Herzegovina, you can see that the Americans decided to have this conference on a military base, where the participants from Bosnia, the three parts of the Bosnian population, the Bosniaks, the Serbs, and the Croats were put into a kind of no man's land, with no, practically, no contact with the with the journalists, with the press, so there were no leaks. And this enabled the conference to come to a conclusion.

Host: Was the peace-making process a turning point for Switzerland's diplomacy?

Ambassador Jean-Marc Boulgaris: In 1815, in the Congress of Vienna after the defeat of Napoleon, the Swiss neutrality was anchored into the international law. And in 1919, the Swiss had to take a decision about joining the League of Nations. But by joining the League of Nations, in principle, they should have dropped all their neutrality policies. They negotiated in order to get a special deal, which they got: military neutrality, but no economic neutrality. That is to say when there were sanctions to be applied against the member of the League of Nations, which were not respecting the decisions of the League, then Switzerland should also apply sanctions. This was of course, a very big point in Switzerland, there was a big discussion, and there was a vote. And there was a vote, which was positive in favour of joining the League, but by a better very narrow margin, practically the same margin as we had in 2002, that is to say 80 years later, by joining the United Nations.

Host: Why does the Geneva Centre for Security Policy play an important role today? Does its work reflect a turning point?

Ambassador Jean-Marc Boulgaris: GCSP is just doing what was asked for by the Geneva government in 1919, that is to say to contribute to the success of the international community and it plays a very important role.

Host: Well, that's all for today's podcast for the GCSP. Thanks for listening. And thank you to Dr Paul Vallet for joining us, along with Ambassador Jean Marc Boulgaris. Join us again next week to hear all the latest insights on international peace and security. Make sure you subscribe to the podcast on iTunes. Until then, bye for now. 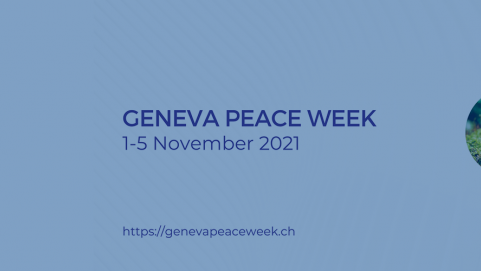