Does international law serve as bone of contention or common denominator for current tensions between Russia and Europe?

The Security and Law Programme  dedicated its third Security and Law: A Reality Check event to the assessment of the role of international law in the ongoing tensions between Europe and Russia. Does international law channel and alleviate the political conflict? Or does the contest over legitimacy and legal justification of actions fuel the dispute and strain political compromise? With these questions the moderator Tobias Vestner, Cluster Leader, Security and Law Programme, kicked off the panel discussions in Geneva and Brussels.

This edition of the Security and Law: A Reality Check event was also organised in Brussels on 26 June at the Mission of Switzerland to the European Union, where His Excellency Christian Meuwly, Ambassador of Switzerland to Belgium and Head of the Swiss Mission to NATO welcomed 45 participants from EU Institutions, EU Permanent Representations, academia and think tanks. 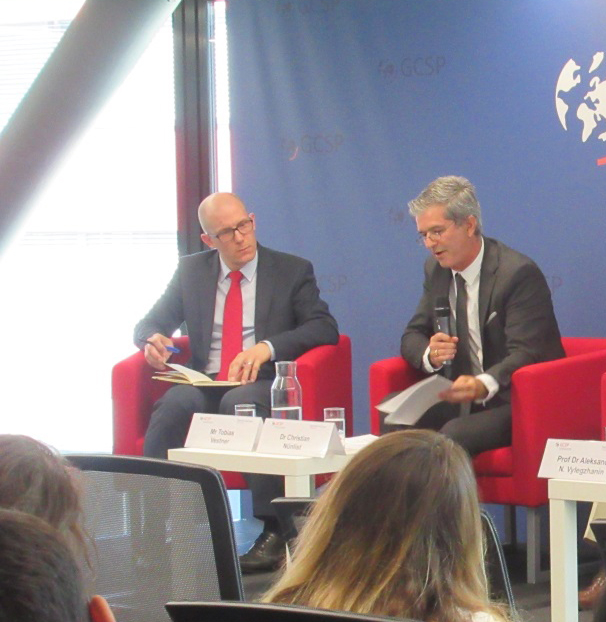 In Geneva, Dr Christian Nünlist, Senior Researcher at the Center of Security Studies (CSS), ETH Zürich, started with a broader historical analysis, arguing that the Ukraine crisis was merely the symptom and not the beginning or cause of today’s confrontation and the return to divided security in Europe. Rather, current tensions had their root causes in an unfinished post-Cold war settlement in 1990 and the failure to build a new European security architecture based on cooperative and inclusive security and partnership between the former Cold War enemies. ‘The US could not resist to perpetuate Cold war institutions instead of replacing them with new pan-European security institutions, like CSCE or Gorbachev’s Common European House”,  Dr Nünlist stated. Another bone of contention in the current dispute, according to Dr Nünlist, are conflicting interpretations of the Helsinki principles and a clear reversal of traditional positions in 2008: while Russia had previously emphasized territorial integrity and state sovereignty, criticising NATO actions in Kosovo, it switched to support self-determination and the concept of the Responsibility to Protect to justify its actions in Georgia. The West countered by insisting on territorial integrity and state sovereignty and non-intervention to condemn Russia. His policy recommendation is thus to start a Paris II process and relaunch a multilateral dialogue on these principles in the framework of the OSCE, concluding that ‘this should be possible today if it was possible during the height of the Cold war’. 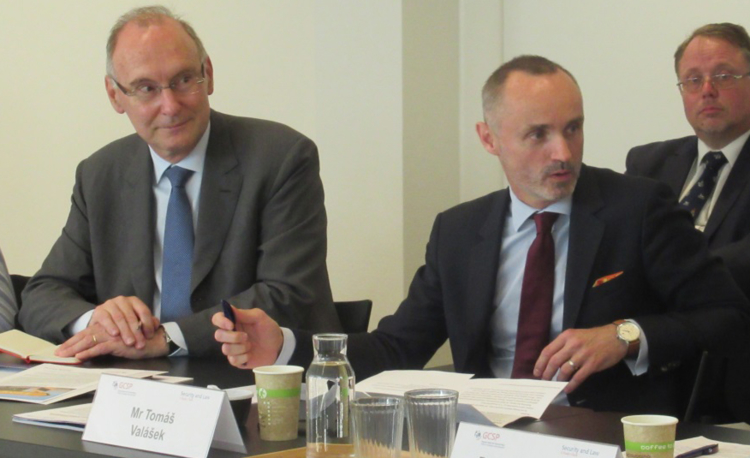 In Brussels, Mr Tomáš Valášek, Director of Carnegie Europe, highlighted that it was important to understand that similar Western and Russian world views were never in fact a reality: while Europe believed that the age of geopolitical competition had come to an end, paving the way to an integration of political and economic systems, Russia continued viewing international relations through a geopolitical lens. Citing former diplomat and renowned Russia analyst Bobo Lo, he stated that ‘irrespective of how Europe behaves, Russia will see itself as an indispensable global power and regard its former Soviet space at its natural sphere of influence’. At the same time, he believes that had the West sincerely wished to test Russia’s will to cooperate with Europe, it should have had acted differently in the 1990s and early 2000s. According to Mr Valášek, the way towards better relations with Russia ought to start with more analysis and less politics and above all, with abandoning the Western perception that it can change Russia’s world view.

Prof. Dr Aleksandr N. Vylegzhanin, Head of the Department of International Law, Moscow State Institute of International Relations (MGIMO) and editor-in-chief of the Moscow Journal of International Law explained that perceptions of Russian international lawyers towards Europe changed drastically after what they believe was a ‘coup d’état’ in 2014 in Kyiv. He added that today ‘European leaders are often regarded as accomplices of violations of international law in Russia’, arguing that in Russia’s view, the forceful overthrow of a constitutionally elected President clearly violated the principle of non-interference. Prof. Vylegzhanin’s main concern, however, is the legal consciousness of both Western and Russian international lawyers. ‘The idea should not be to accuse each other of certain violations but to understand the legal arguments of the other party, trying to harmonise elements and to lead research in an honest way’. Reflecting on the question of whether international law is a bone of contention or a common denominator, Prof. Vylegzhanin concluded that international law evidently can become a bone of contention when two countries find themselves defending their case at the International Court of Justice. However, when it comes to the overall system of international law, ‘there is no alternative; it must be a common denominator’.

Prof. Dr Mikael Baaz, Associate Professor in International Law and in Peace and Conflict Studies at the University of Gothenburg believes that studying international law from a comparative perspective is essential, for ‘international law is not really international but different in different places’. He argued that in international relations ideas and ideologies precede action and it is thus necessary ‘to analyse international law as a language rather than simply black letter law’. He also brought a new angle to the debate, stating that international law has the potential to serve as ethical basis for today’s society but only if it is used wisely and in ways that are considered legitimate. ‘Since there are no rational grounds for making ethical choices when confronted with moral dilemmas in world politics, international law stands out as best alternative. International law is an instrument’, he added.

After the summer break the Security and Law Programme will be back with a “Working Breakfast for Lawyers” in mid-September and with its next Reality Check “Responsibility to Protect is Dead – What next ?” on 17 October 2018.

Dominika de Beauffort is a Senior Policy Officer under the Security and Law Programme. In this role Dominika leads projects, teaches and is Course Director of the executive education course “International Disarmament Law”. She also contributes to the event series “Security and Law: A Reality Check”, a public dialogue that explores how international law matters in security affairs. Dominika has conducted research on the Arms Trade Treaty with a focus on national implementation practices regarding prohibitions and export assessments. Her current research interests include gender perspectives in international disarmament treaties.

Dominika brings many years of experience in consulting and training in the private and public sector in Brussels and Geneva. Prior to joining the GCSP, she was a senior consultant at PACT European Affairs (now EPPA), where she led European public affairs workshops and training sessions for private companies, NGOs and diplomatic missions.

Dominika is a trained conference interpreter and after completing a postgraduate Master’s degree in European Interdisciplinary Studies at the College of Europe, Belgium, she has further specialized in international law at the Law Faculty of the University in Linz in Austria. Dominika is an Austrian and Polish national. She speaks German (native language) and fluent Polish, English, French and Russian.

Reinvigorating the Protection of Civilians – A Geneva Security Debate