Skip to main content
Navigation
My GCSP
Back to all Publications

Things are not going well for the current UN peacekeeping missions in the African countries of the Central African Republic (CAR), Democratic Republic of the Congo (DRC), Mali and South Sudan. Two of the largest peacekeeping missions – in the DRC and Mali – are being criticised for not fulfilling their mandates because they are unable to protect civilians adequately. At the same time, the Security Council has mandated that the missions should prepare to transition out of these countries. This will create a security and protection vacuum that will especially affect civilians. Rather than making more funds available to the humanitarian community as this transition occurs, humanitarian needs are not being adequately met. Although not facing the immediate crisis that exists in these latter missions, the other two missions in the CAR and South Sudan still face key gaps in meeting humanitarian needs.

In the DRC civil society requested that the mission (MONUSCO) leave the country. Shortly thereafter protesters stormed several MONUSCO bases in the country’s eastern provinces on 25 and 26 July 2022. To make matters worse, for reasons that are as yet unknown, blue helmets opened fire on civilians on 31 July 2022 in the town of Kasindi on the border between the DRC and Uganda. This is only the most recent in a series of events that prompted the Security Council to demand an exit strategy from MONUSCO back in 2017.

In Mali, the government formed after the most recent coup is trying to drive the UN mission out of the country, arresting 49 Ivorian soldiers at Bamako Airport on 10 July 2022 on suspicion of espionage. The soldiers were not spies, but subcontractors of the UN mission (MINUSMA) who were supposed to guard a transit camp for the German contingent. Shortly after, MINUSMA's spokesperson was declared persona non grata because of a social media post about the Ivorian soldiers and was forced to leave the country. After forcing the French contingent to withdraw, Mali is now engaged in political squabbles with other European countries. The rotation of UN troops and police officers has been temporarily halted, and the Germans are no longer permitted to use their transit camp. Suspicions are that the government intends to pit European countries against Russia, with the country becoming increasingly reliant on Russian military assistance. While the Malian defence minister refuses to speak to the Germans, the German government decided to withdraw its troops in 2023. The United Kingdom and the Ivory Coast recently announced the withdrawal of their troops.

When governments fail to bring peace and security to their countries while peacekeepers are present, a recent trend has been to use the UN and its peacekeepers as scapegoats and blame them for failing to protect civilians, followed by a demand that UN troops leave the country. It is not uncommon for the public to criticise UN missions. This contradicts a plethora of academic studies showing that the presence of UN soldiers can protect civilians from violence. However, the missions are tasked with not only protecting civilians, but also with assisting in the stabilisation of the political environment. The UN's successes appear mixed in this context.

During the 1990s the UN proved to be unable to adequately respond to the changing nature of “complex emergencies”. The stabilisation of countries in asymmetrical civil wars needs humanitarian, military and diplomatic efforts,
but the UN and its various agencies were not aligned in their approach and operated in isolated, parallel silos. Since 1997 new peacekeeping mandates involve the stabilisation of the relevant country’s political context by integrating political, military and humanitarian actors. The humanitarian community uses a similar concept known as the “Triple Nexus”, which aims to foster collaboration among humanitarian, development and peace actors.

In integrated missions, the UN “triple hats” the number two of the UN representatives. Previously three different functions, the deputy chief of the peacekeeping mission is now also the development and humanitarian coordinator. Although the UN reaffirmed that integrated approaches should respect humanitarian principles, in practice this is almost impossible when a mission has a political mandate. Critiques of the integrated approach argue that the blurred lines between humanitarian and military actors shrink the humanitarian space.

So-called quick impact projects (QIPs) coordinate military stabilisation activities in peacekeeping missions. These stabilisation measures are humanitarian or infrastructure projects with a budget of up to US$50,000 and a duration of up to six months. The primary goal of QIPs is to improve the perception of the peacekeeping mission rather than to contribute to the long-term development and well-being of the local population. According to the UN guidelines on QIPs, projects should "instill trust in the mission, its mandate, and the peace process”.

Despite these efforts, UN peacekeepers are unpopular and face negative perceptions. This could be related to unmet humanitarian needs: if people are starving, the presence of UN peacekeepers is of little use.

Firstly, estimated required funding for the humanitarian response plans in Mali and the CAR was far below the annual budget for the respective country’s peacekeeping mission. Yet despite this, less than half of these needs were met in some years. As a result, at times humanitarian funding accounted for less than a quarter of total funding for the peacekeeping mission. The disparity between humanitarian and peacekeeping funding is especially pronounced in Mali. Humanitarians have complained that aid in Mali is overly militarised. Médecins Sans Frontières, for example, claimed that MINUSMA's counter-terrorism operations use humanitarian aid to support military operations. In a report entitled Mali's Humanitarian Crisis: Overmilitarized and Overshadowed, Refugees International called for a clear distinction between humanitarian and military actors.

Secondly, in the DRC and South Sudan estimated humanitarian needs exceeded peacekeeping budgets at times. Nonetheless, in the case of the DRC the UN member states spent far less money on humanitarians than on peacekeepers. Only in South Sudan did the humanitarian community receive more funding than the peacekeeping mission, although it was still far below the population's actual needs. 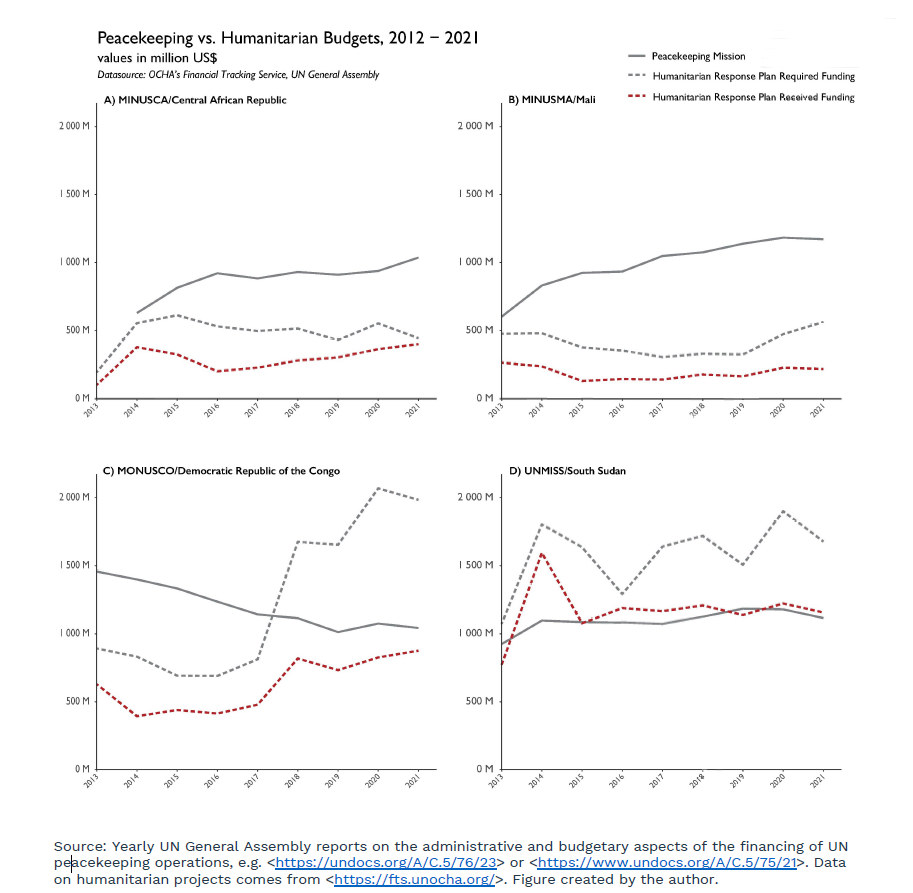 Most importantly, the international community fails to provide funding to meet the required humanitarian needs in all four countries. On several occasions, with the exception of South Sudan, less than half of the needs were met. This is significantly less than the global funding average, which is around 60% of what is needed. In fact, peacekeeping countries lower this average, as most other humanitarian response plans receive 70% or more of required funding. With far more resources at their disposal, peace-keepers dominate the agenda and operations in a country. The current humanitarian response plan in Mali is so notoriously underfunded that on 3 October 2022 the Secretary-General called on the international community to step up and meet the humanitarian needs of the country. Instead, according to a leaked letter dated 15 November 2022, France decided to suspend all official development aid to Mali, most likely due to the Malian government's increasing involvement
with Russia.

The missions in Africa are under increasing pressure. The UN is already discussing a transition period for MINUSMA and MONUSCO during which the missions will be terminated. If the missions leave these countries soon, other actors will be forced to fill the void by focusing on political and humanitarian goals without the use of force. In Mali the number of internally displaced persons quadrupled over the past two years, gender-based violence is on the rise, and about 2.9 million children do not have access to schools. In the DRC 5.5 million people are still displaced, 4 million children under five years of age are malnourished, and the country is repeatedly plagued by deadly Ebola outbreaks. However, humanitarian actors have received insufficient funding for many years and are thus unable to meet the population’s needs. Rather than putting humanitarian goals and resources behind political or military goals, the UN should enhance efforts for even greater integration. To do this, closing the humanitarian funding gap should be prioritised. This may also help to improve perceptions of the UN among affected populations, thereby reducing the opportunities for friction between the local population and peacekeepers.

Melanie is currently completing a Ph.D. in Political Science at the European University Institute (EUI) in Florence. Additionally, she is member of the external doctoral school of the Peace Research Institute Oslo (PRIO). In general, her academic interests revolve around peace and conflict studies. More specifically, Melanie focuses on the role of humanitarian organizations and UN peacekeeping missions in armed conflict, as well as civil-military coordination between humanitarians and peacekeepers. Methodologically, her project combines causal modelling of spatial conflict event data with qualitative fieldwork methods. While on leave from her PhD, Melanie worked as a Protection of Civilians Officer at the United Nations Multidimensional Integrated Stabilization Mission in Mali (MINUSMA). Previously, she worked with local NGOs in Ethiopia and Ghana, the UN Secretariat in New York, and as a media designer – hence why she is currently also specializing in information visualization. There is a huge need for data to be presented in a way that it is understood by experts and non-experts alike. Melanie holds an MA in Peace and Conflict Studies from the University of Oslo and a BA in Political Science, Law and Islamic Studies from the University of Zurich.

Disclaimer: The views, information and opinions expressed in this publication are the author’s/authors’ own and do not necessarily reflect those of the GCSP or the members of its Foundation Council. The GCSP is not responsible for the accuracy of the information.